Haven’t posted one of these in a while.

Over the past couple of months I’ve been upgrading my PC. I’m still about half way through but getting there. I’ve been bitten by the RGB bug, which is a complete pain in the arse.

I’ll be upgrading the mouse although I love the bloody thing, ram, additional internal RGB thermaltake fans and mouse mat.

The big problem is getting all the RGB to sync. I’ll be using the thermaltake tt premium controller to sync the fans with the mobo as it is aura compatible but the corsair stuff is a little more complex as they all want you to buy their own stuff. There’s a couple of ways to try out.

If anyone is thinking of doing an RGB Set up I’d suggest sticking to one brand.

The difference between the two is about 30 fps in BF1, 20 in the division and 35 in BF4 on everything maxed in the settings.

This is mainly due to the cpu as the 6700k isn’t the best for gaming. Also, the TT cooler keeps the 8700k really cool and I’m clocking it at 4.8ghz easily but lost stability above it.

The 1080ti is an absolute monster card and it’s also really consistent. It feels more stable than the 2080 to be honest. Also, as I said on the bf5 page RTX is not ready, in my eyes, for this card. It literally cuts your FPS in half if not more. Additionally, if you are in heavy areas with reflection it will drop it under 50fps and if there’s an explosion the game will stick and then drop down to 10 fps for a few seconds. It’s better to turn RTX off and just max everything out including resolution.

I have RGB RAM, RGB cooler and Mobo has RGB in it as well. As I’m sure you can see in the picture. GPU porbabyl has some rgb or lights in it as well.

Other stuff you can see is teh basic Apple fanboy set and Audio-Technica AD700x althoug I more often use AKG K7XXs. On top of the Case (Fractal R5) you can see old x-fi sound card, that wouldn’t fit work with the new mobo and Wacom tablet I use to edit sexy selfies of myself.

Here is my new setup:

Two Samsung SSD 2.5 (temps around 34-37c) One of them is next to the PSU, while the other is at the frontpanel bracket)

Two 120mm PureWings 2 (intake, not super quiet, but has a nice airy hum to them)

Corsair SF450 (fans are off in idle, starts when gaming, cannot hear it)

Any cooler recommendations for 2700x? Stock is a bit loud.

Any cooler recommendations for 2700x? Stock is a bit loud. 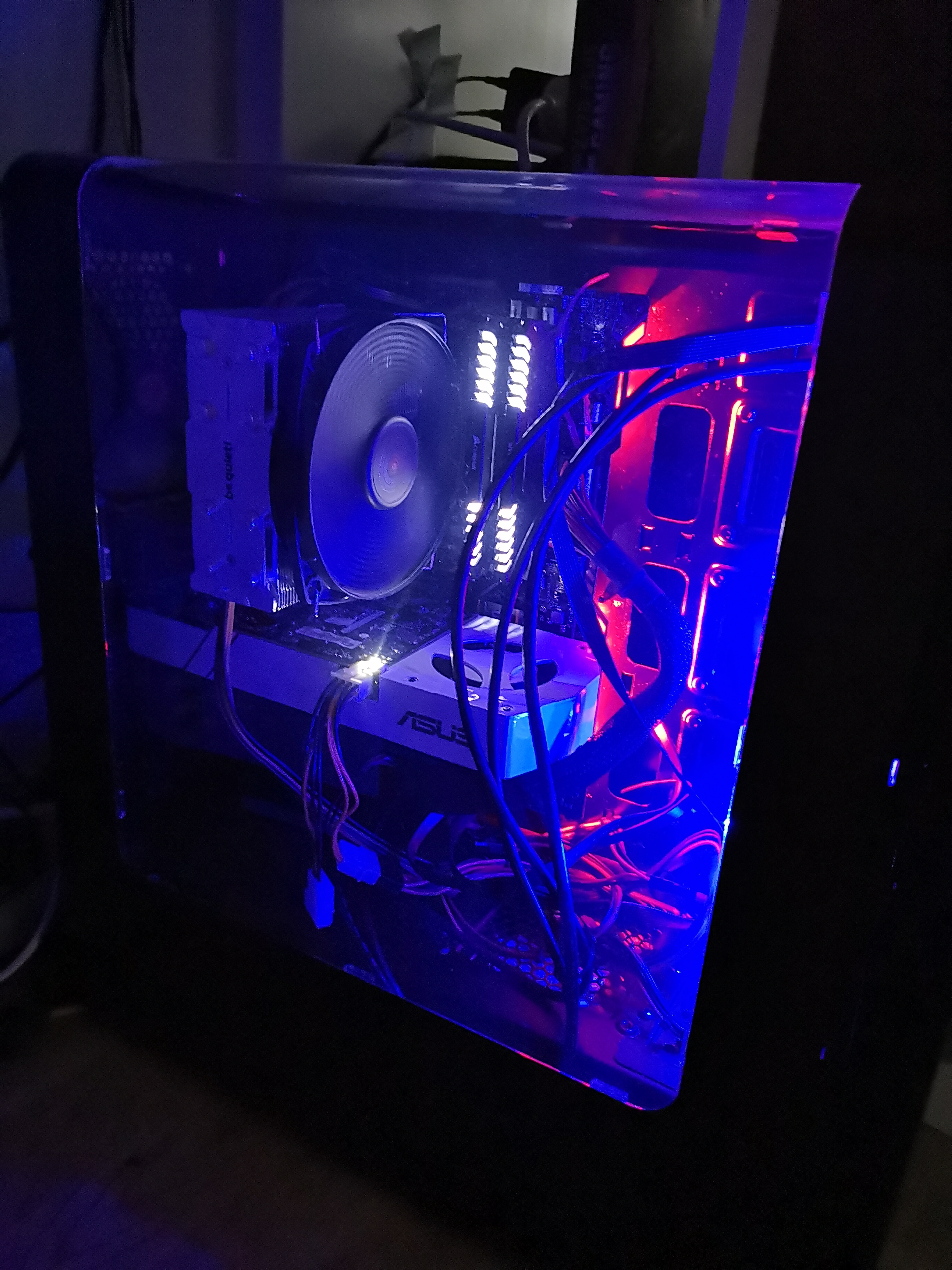 Case is a thermaltake view 27 i got this christmas.
Motherboard is a TUF z370-plus gaming (you will notice im not good at tech stuff and this is all from memory)
CPU is a IntelCore i5-8600k @ 3.60ghz (6 CPUs) ((Im reading this from the dxdiag command)
GPU is a Nvidia Geforce GTX 970
Ram is Corsair something… cant remember. 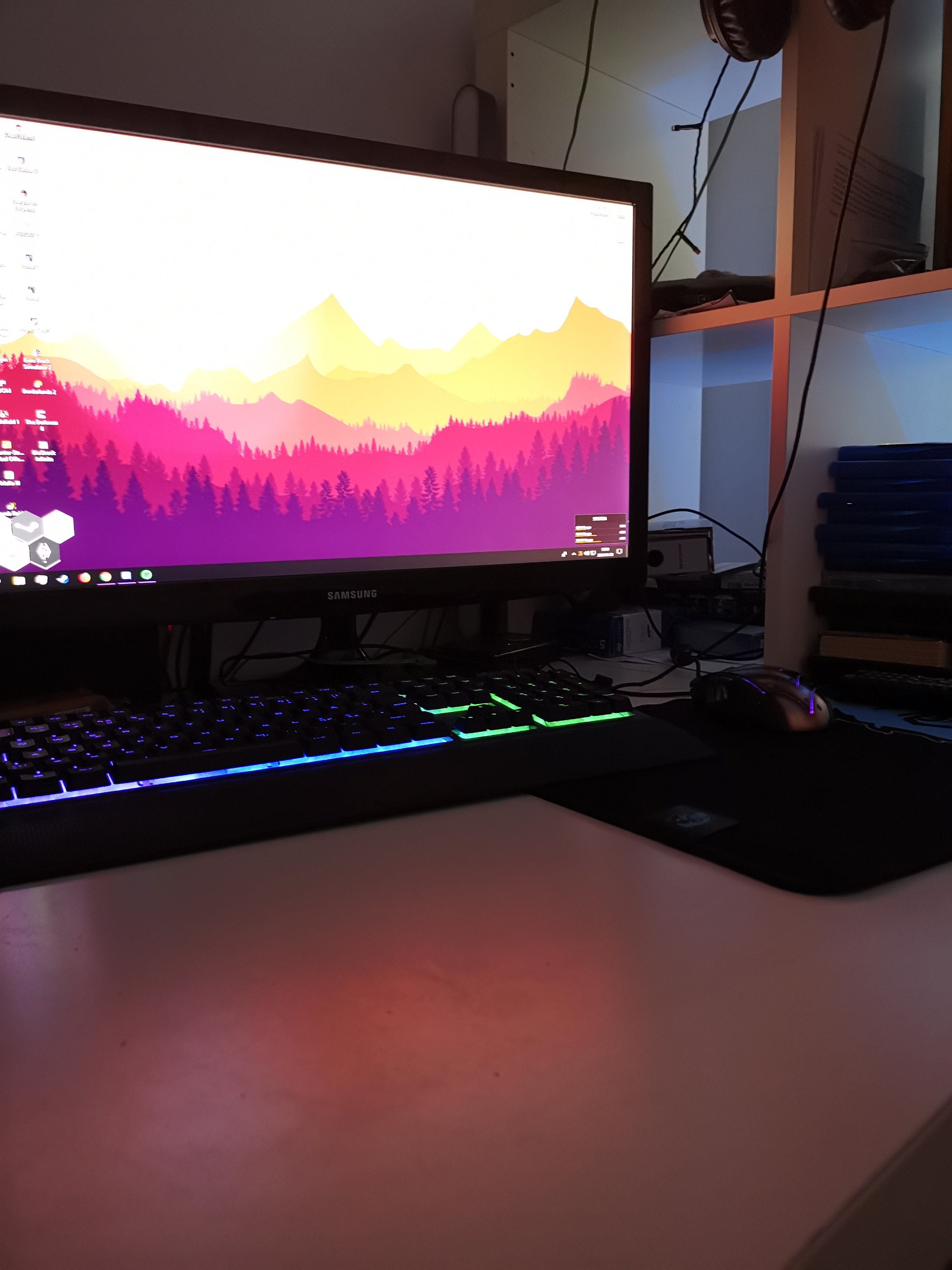 Using an old tv as a monitor where i have my ps4 also hooked up to, corsair k55 keyboard and a steelseries warcraft cataclysm mouse (The size is good…. oh so good..)
Xonar x7 soundcard thingy where my headphones go

Nice, but that cable management. It burns my eyes. 😀

Desk is too clean.